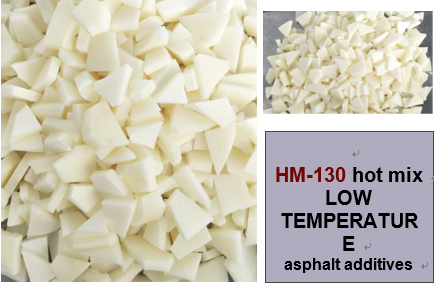 HM-130 is an anti-stripping agent which enables asphalt concrete to be produced at 130°C or below and compacted at 90-100°C in road construction and maintenance. There is a significant drop of temperature in the mixing, paving and compacting process compared to the traditional HMA at 180°C or above. This results in HM-130 having a positive environmental impact due to energy saving, minimum waste gas, fume emission and higher dose of RAP (recycled asphalt pavement).

In comparison with the traditional HMA, Ever TechTM HM-130 asphalt additives have the following advantages:

Adhesion In the mixing process which is carried out at 30-50° C less than the traditional HMA temperature, the HM-130 additive decreases the viscosity of the asphalt enabling faster homogeneous coating on aggregates with increased binding strength and tenacity of the asphalt to the aggregates.

Road Safety AASTHO T-283 Water Sensitivity Test was carried out after soaking the asphalt blocks in water. The data shows that the blocks containing HM-130 has an indirect tensile strength ratio higher than those traditional HMA by 10%. Thus HM-130 has a stronger effect to eliminate the formation of pot holes on the road surface. As a result, road safety is greatly enhanced.

Heat Stability In comparison with traditional HMA, the asphalt with HM-130 can be kept in warm conditions for 10-14 days without altering its tensile and anti-stripping properties.

Road Building costs The HM-130 additives significantly reduce the time and temperature in the mixing process, resulting in substantial savings on energy and labour therefore reducing the road building and repair costs.

Road Life Not only having the same properties as the HMA, (which increases the durability and integrity of the road, despite exposure to heavy traffic and poor weather conditions), the roads constructed with HM-130 are subjected to less cracking due to lower temperature.

Health of workers Workers’ health improved due to significantly reduced waste gas emission during production and paving, particularly in tunnels and enclosed areas.

Extension of paving season HM-130 additives greatly reduce the mixing and paving temperature which enables roads to be built and maintained during most seasons. 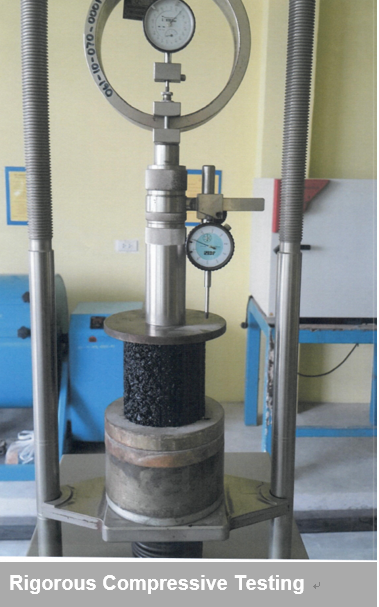 After rigorous compressive testing at the affiliated laboratory of the Ministry of Transport in Thailand, the report data confirms the following results:

Mixing time Ever TechTM additive accelerates the asphalt and aggregates mixing process which reduces the mixing temperature by 30-50°C. This saves energy and increases the production capacity.

Water Sensitivity Test – AASTHO T-283 Tests have been carried out after soaking the asphalt blocks in water. The data shows that the blocks containing HM-130 additives has an indirect tensile strength ratio of 98%, compared to aged non-water immersion blocks. 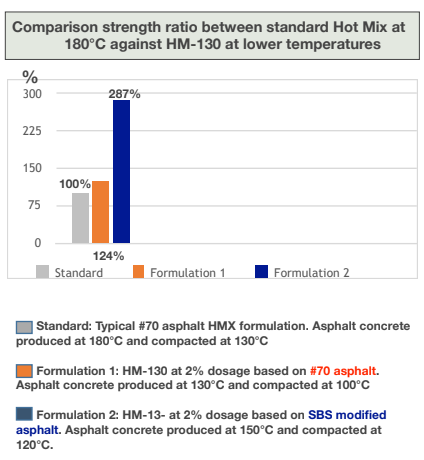 The amount of additives required is approximately 1.5-2% of the total asphalt used. The process simply requires combining the recommended amount of HM-130 additive with the hot melted asphalt to form a hot asphalt mixture. After mixing, it can be used to build or repair the road.